Mopani Worms and the Weavers

Last week we were given a bag of Mopani worms because we were curious about them.  I'd heard that they are quite delicious and that they are easy to prepare and full of protein and everything that is good.  While I wasn't about to go running to pick them off the Mopani tree, I wasn't put off by the bag of worms we received.

The worms came to us dried up and shriveled in a plastic bag.
I ask Q what in the world to do with them since he is quite the fan of the "little fellows", as he calls them.  He asked his wife for the recipe and before I know it, my cell phone dings and the recipe is ready for me to use.  Today seems like worm-cooking weather (if there is such a thing), so I came home early from the office with a goal in mind.

﻿ First, we cook the "little fellows" for 5-8 minutes so that they get reconstituted.  Those suckers got plump and soft and it was really easy to see the neat colors on their back, which I had missed when they were shriveled up.  The water turns all sorts of brown, making me think about all the things worms tend to crawl through.  OK.  Not going to dwell on that!  Moving right along.  At the 8 minute mark, I take the worms off the stove stop and pour them into a strainer.  I heat up some oil and in they go. 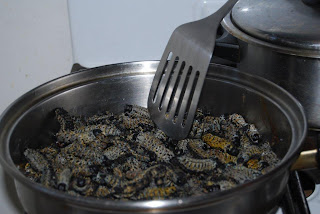 I fry them for what seems like an eternity, trying to get them crispy.  I don't want to burn them, so I keep flipping them over and over, making sure they get cooked on all sides.  Once I hear the sound of something crispy frying, it is time to put some salt on them and to pop them in our mouths.  Morgan and I give them a try and they aren't bad at all!  Aiden runs into the house (he's been outside all afternoon), asks what we are eating and decides he'd like to try them.  The kid loooves them!  He pops them in his mouth, chews, swallows, and asks for more.

We prefer the original recipe, without the tomatoes.

I'm guessing the mopani worms were a hit for us.  Not something I'd order at a restaurant over filet mignon, but not something I'd turn my head to.  If I ever didn't want one, I know Aiden would eat his portion and mine, with no problem whatsoever.

I hear Eric chomping on worms as I type.
Posted by Unknown at 9:35 AM